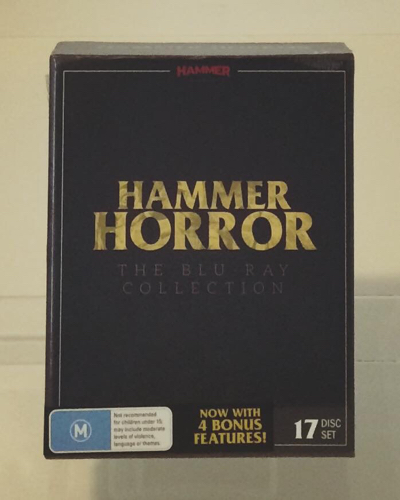 Today’s mail was comprised of only one arrival, but it’s a doozy: Shock Entertainment’s “Hammer Horror” box set. The set contains a whopping 15 classics from the revered British studio on Blu-ray, many starring horror legends Peter Cushing and Christopher Lee and nearly half (“Dracula: Prince of Darkness,” “The Devil Rides Out,” “Frankenstein and the Monster from Hell,” “Frankenstein Created Woman,” “The Hound of the Baskervilles,” “The Brides of Dracula,” “The Curse of the Werewolf”) directed by the great Terence Fisher.

Fisher was something of a late bloomer, not earning his first credit until he was in his 30s. From there he advanced quickly, though, directing his first feature at 44 with 1948’s “Colonel Bogey” and helming “The Last Page,” his first Hammer picture, in 1952. At the time Hammer hadn’t yet become synonymous with gothic horror, so for the next five years he called the shots on more than a dozen films in a variety of genres. In 1957 Hammer released “The Curse of Frankenstein,” which revitalized the once-great Universal property by filming in color and sating audiences’ lust for spurting blood and heaving bosoms.

The film would serve as a template of sorts for the pictures that followed during Hammer’s heyday, with director Fisher, screenwriter Jimmy Sangster, and stars Peter Cushing and Christopher Lee serving as integral parts of the studio’s success. Fisher’s tenure at Hammer wasn’t without its challenges, though: his “Phantom of the Opera” (the studio’s most expensive film ever at the time) was a flop that led to a parting of ways, at which point he went off and made sci-fi films like “Island of Terror” and “The Earth Dies Screaming.” Also, after his successful return to Hammer with 1968’s “The Devil Rides Out,” Fisher was severely injured in a pair of car accidents, yet returned in 1974 for his final Hammer film, “Frankenstein and the Monster from Hell.”