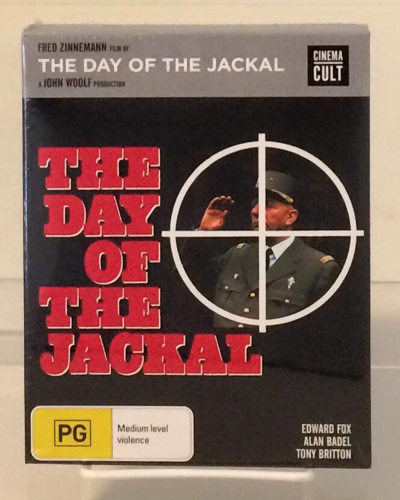 4xblu received one title in the mail today, the customer requested debut of Fred Zinnemann’s “The Day of the Jackal” from Australia. One of the great political thrillers of the 1970s, the film stars Edward Fox as the titular Jackal, a world class assassin who’s been contracted to kill French president Charles de Gaulle. The film is a taut, documentary-like procedural that follows the Jackal as he travels around Europe, meticulously seeing to every detail as he makes the necessary preparations to carry out the job.

“The Day of the Jackal” is based on a novel of the same name by Frederick Forsyth, whose works have also provided the basis for films such as Ronald Neame’s “The Odessa File” and John Mackenzie’s “The Fourth Protocol.” Though there are historical elements that are woven into the narrative, the plot to kill de Gaulle at the center of the narrative is fictional.

The film’s director, Fred Zinnemann, was among the influx of filmmakers (such as Billy Wilder and Edgar G. Ulmer, who worked on the docudrama “People on Sunday” with Zinnemann) who left Berlin during the late 20s and early 30s for a chance to make it in the American film industry. However, Zinnemann would return to Germany for his breakthrough hit, 1948’s “The Search,” which starred Montgomery Clift in his feature debut. Zinnemann teamed with Clift again on “From Here to Eternity,” for which he would win an Oscar for Best Director. In addition to “The Day of the Jackal,” Zinnemann’s credits also include such classics as the western “High Noon,” the beloved musical “Oklahoma!,” and the historical drama “A Man for All Seasons.”