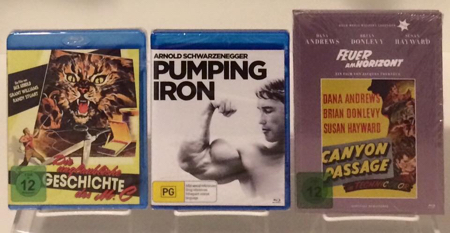 “Pumping Iron” started out as a book with photography by George Butler and text by Charles Gaines. In trying to turn his subject into a movie, Butler realized that he would need Arnold Schwarzenegger — who’d recently retired from competitive bodybuilding after winning the sport’s highest honor, Mr. Olympia, five years in a row — to star in the film. Arnold agreed to come back for one last title, and thus the stage was set for the film’s central drama: the contrast between Schwarzenegger and his chief competitors for the Mr. Olympia crown, Sardinian strongman Franco Columbu and hulking newcomer Lou Ferrigno.

Despite the film’s fly-on-the-wall verite style, it’s generally accepted that the film’s central figures saw the value in exaggerating certain aspects of their personalities in order to play into archetypes they felt would make the film more dramatic. Therefore, it’s hard to say how much of Schwarzenegger’s arrogance, Columbu’s naiveté, or Matty Ferrigno’s stage mom routine is for real and how much is for the cameras. One thing’s for sure, though: by the time the competitors take the stage in Pretoria, South Africa for the film’s climax, no one can deny the authenticity of the dramatic conclusion to which the film has been building.