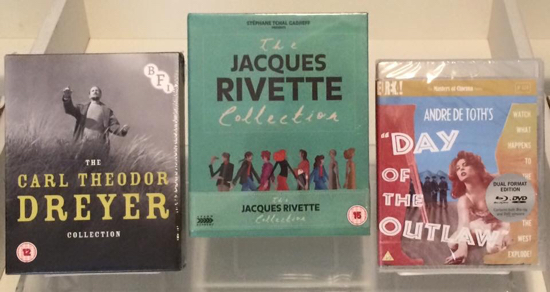 For today’s additions to the 4xblu online store, a couple of box sets were selected to join the ranks of the titles you can buy at the website. Accompanying Arrow’s “The Jacques Rivette Collection” and BFI’s “The Carl Theodore Dreyer Collection” is Andre de Toth’s “Day of the Outlaw,” which sold briskly the first time it was in the online shop.

For those who remember Criterion’s Dreyer DVD set, BFI’s box is hardly a carbon copy of that release. While, like the Criteron, it contains “Day of Wrath,” “Ordet,” and “Gertrud” (albeit in 1080p) and “My Metier” in standard definition, the BFI also comes with Danish and English versions of “Master of the House” (released separately by Criterion), seven short films directed by Dreyer between 1942 and 1954, and a treasure trove of bonus features too bountiful to list. To no one’s surprise, BFI’s Dreyer set finished at the top of DVDBeaver’s year end poll for 2015, second only to Criterion’s “Apu Trilogy” box.